When we first met the BXI team in early 2022, they came to us with an intriguing prospect: to help them create a platform that enables businesses to conduct transactions using barter in lieu of cash. Referring to the exchange of goods and services without the use of money, barter remains the oldest and perhaps simplest vessel for conducting trade, predating any modern currency or credit systems. 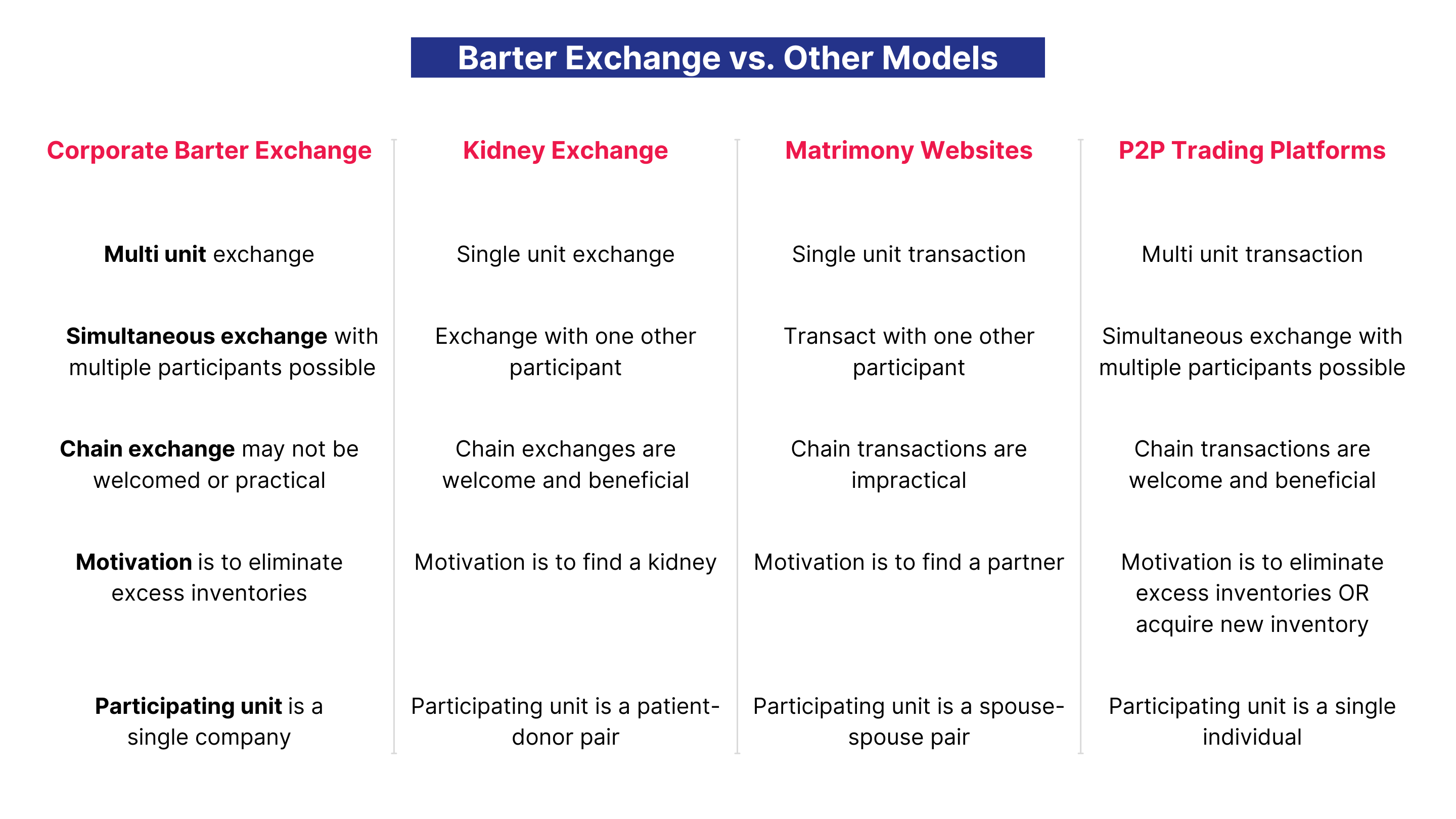 While it's entirely possible to think of barter as an archaic construct from ages past, it has very much retained its relevance. As per HBR, 'business bartering is big, and it’s happening at every level', with the International Reciprocal Trade Association reporting that in 2011, over 400,000 companies worldwide used bartering to earn an estimated $12 billion on unwanted or underused assets. This relevance was further propagated by the COVID 19 pandemic, during which many businesses faced a cash crunch and shifted to barter as a way to conduct transactions while limiting costs. The BXI team, led by Viral Thakker and Gautam Gulati, sensed an opportunity.

Viral and Gautam have been long-standing stalwarts in the media and advertising space, and were well attuned to the potential of barter in enhancing their business. They came to us seeking a clear roadmap towards realizing its potential in India. We began by tackling the question that lies at the crux of design thinking: why barter? 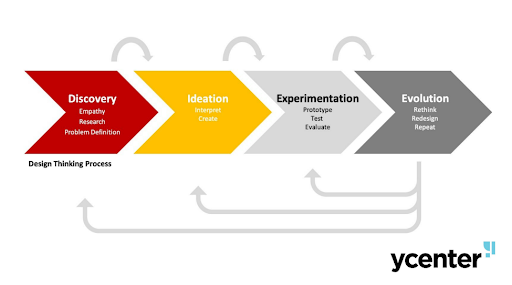 Caption: At the core of design thinking lies the all important question of ‘why’.

We began by reaching out to all the companies who were listed on BXIs portal at the time, as well as a few that our team was already connected with. Our team conducted over 12 hours worth of interviews with companies across 11 different industries during a 15 day period. Our team tried to gain an understanding into why businesses would be compelled to use barter, and also what stood in the way of that. We learnt that BXI’s existing position, as something that would solve surplus stock issues, would end up being a short-sighted plan. Companies don’t see surplus stock as an issue at all. They already have tools and strategies to manage their external-facing inventory. The oversight was occurring in the management of their internal inventory, and this is where BXI could carve out a niche. 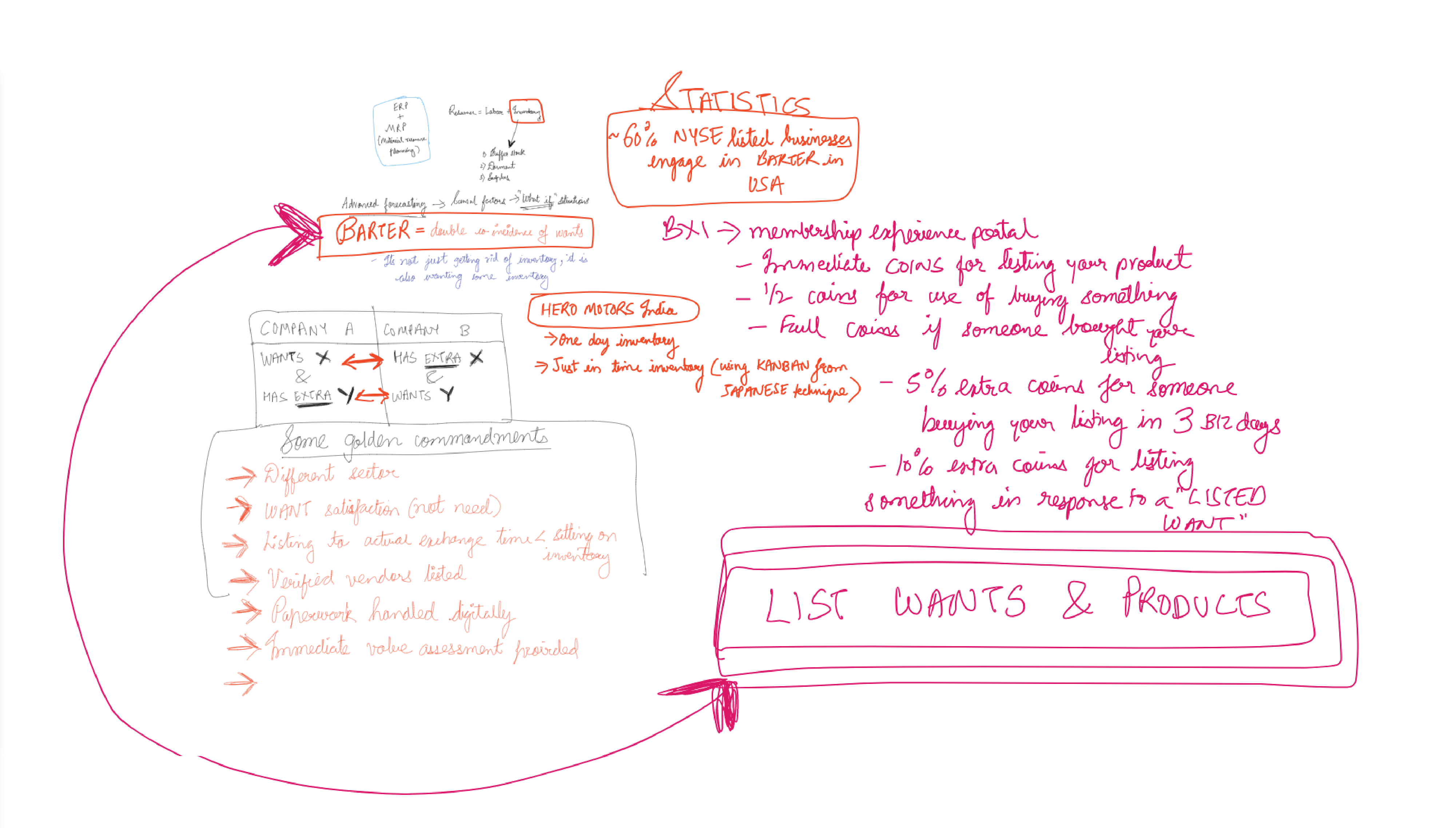 Caption: Our team began by delving into an exhaustive primary research process.

We also realized that we needed to contend with the perception of barter as a trade practice. Presently, businesses perceive barter as something of a last resort, instead of a legitimate avenue to save cash and enhance their business. Another major problem lay in the low success rate of barter on existing platforms. Barter requires a double coincidence of wants, barring which it ends up proving wasteful for one party or the other. We also realized that the trust in barter as a practice was further hindered by the poor customer experience offered by existing platforms. 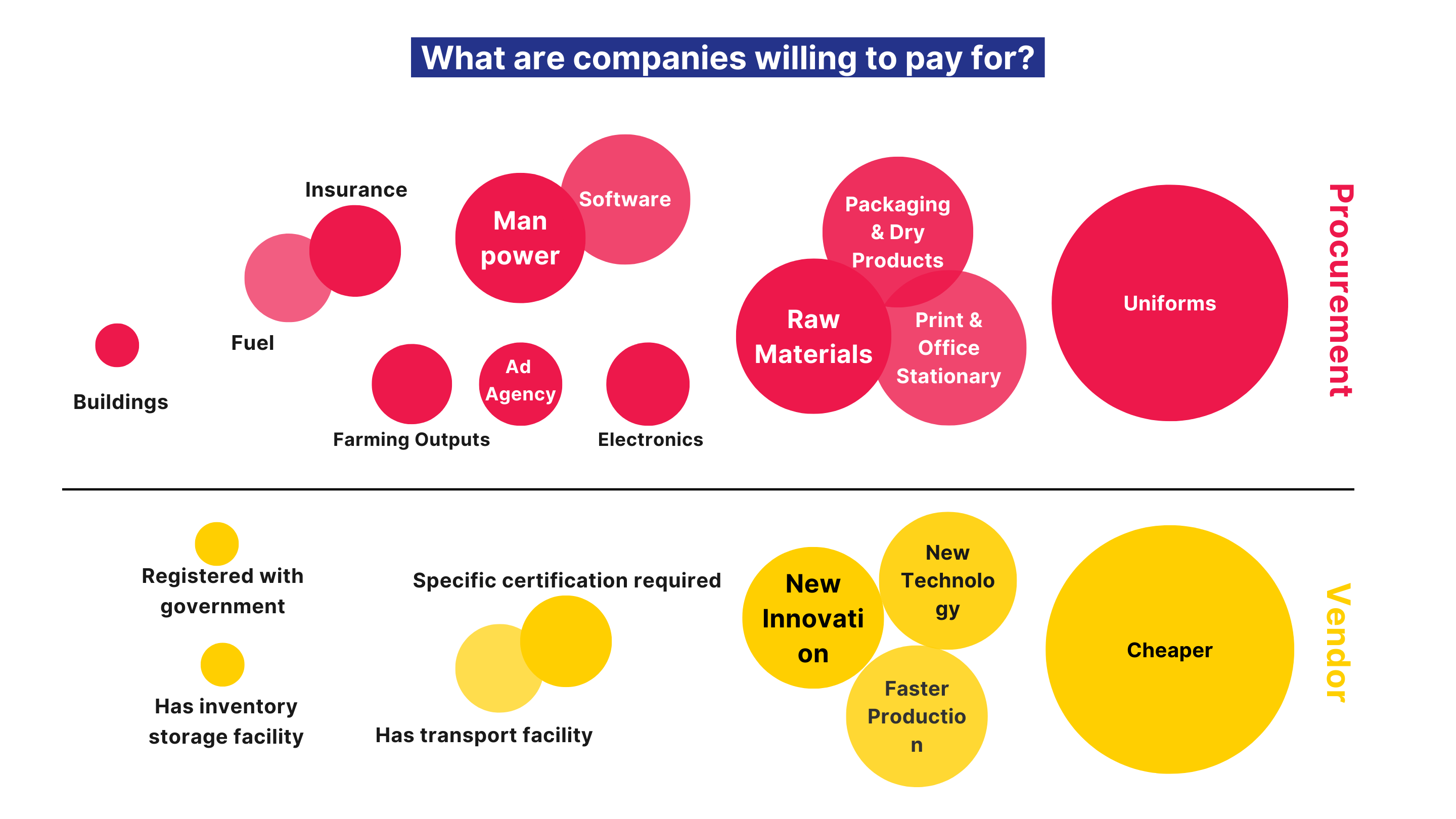 Caption: We needed to understand how businesses manage their inventories, and where barter could come into play.

What we needed to do was build something that was capable of changing this perception of power; something that instilled trust. Our research compelled us to look beyond creating a mere service or platform; we needed to build up barter as an industry on its own merit.

Our team began by delving into the mechanics of trading platforms in different industries, as well as examining the way barter operated in India. Our goal was to gain a better understanding of what already exists, and what opportunities lay for BXI to create a platform that standardizes barter as a means of trade. Our process was exhaustive; it even involved a member of our team conducting an interview in the regional Indian language of Hadoti. Hadoti is a language spoken in the culturally rich Indian state of Rajasthan; we used it when speaking to a local real estate business in order to understand how COVID 19 had impacted their sector and changed consumer behavior. 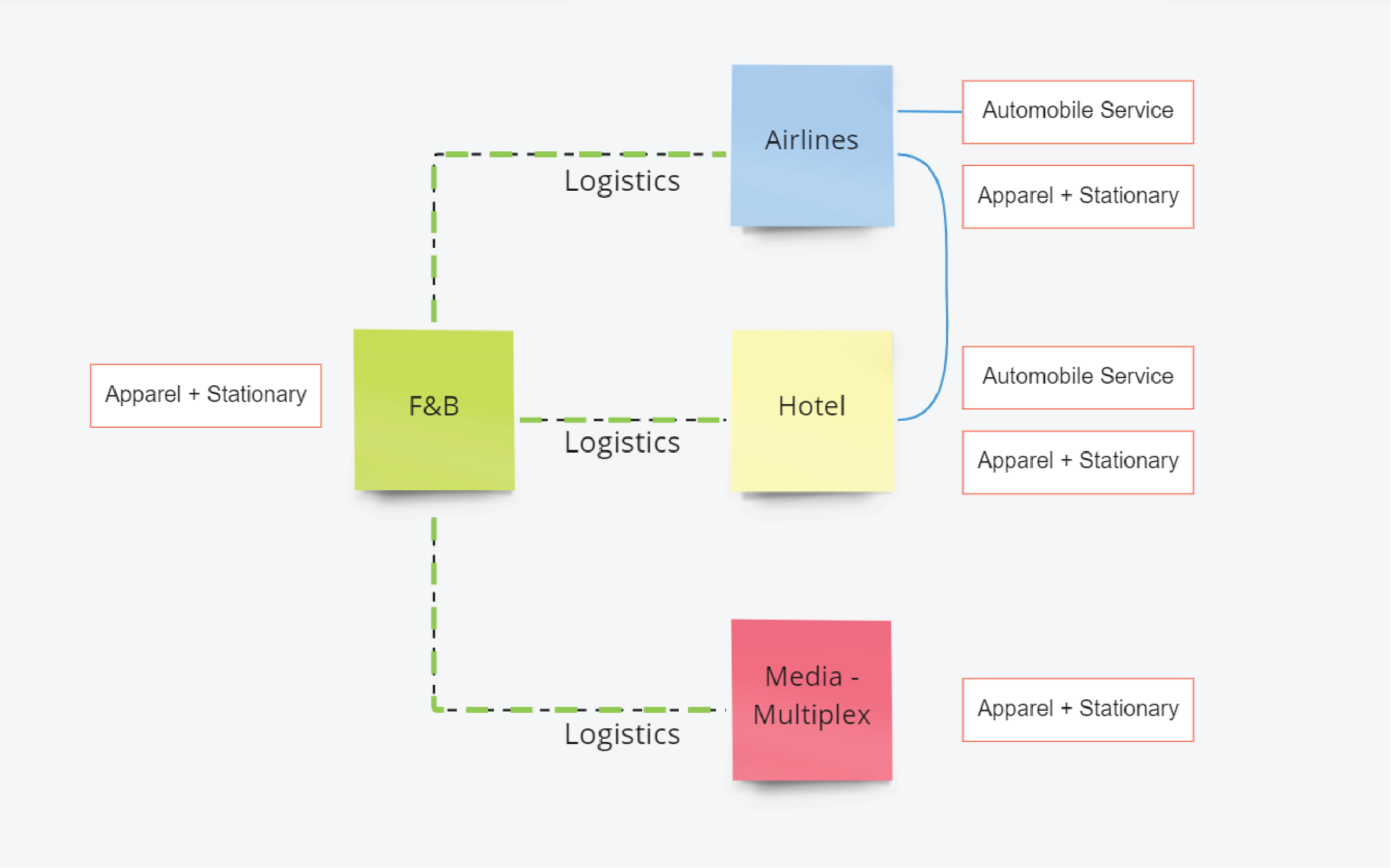 Caption: We conducted interviews across 11 different industries to understand the needs and behaviors of businesses, especially post COVID.

Our work with BXI also called for us to design user flows to chart how users would interact with the platform. This process allowed us to lead with divergent thinking, and emerged as an exhausting yet extremely rewarding part of our journey. A member of our team even mapped the user journey of her mother on an e-commerce site, to gain an insight into how someone of that demographic would respond to a digital platform.

Caption: User journey of one of our team member’s mother on an ecommerce app to help us understand how individuals of that demographic respond to digital platforms. 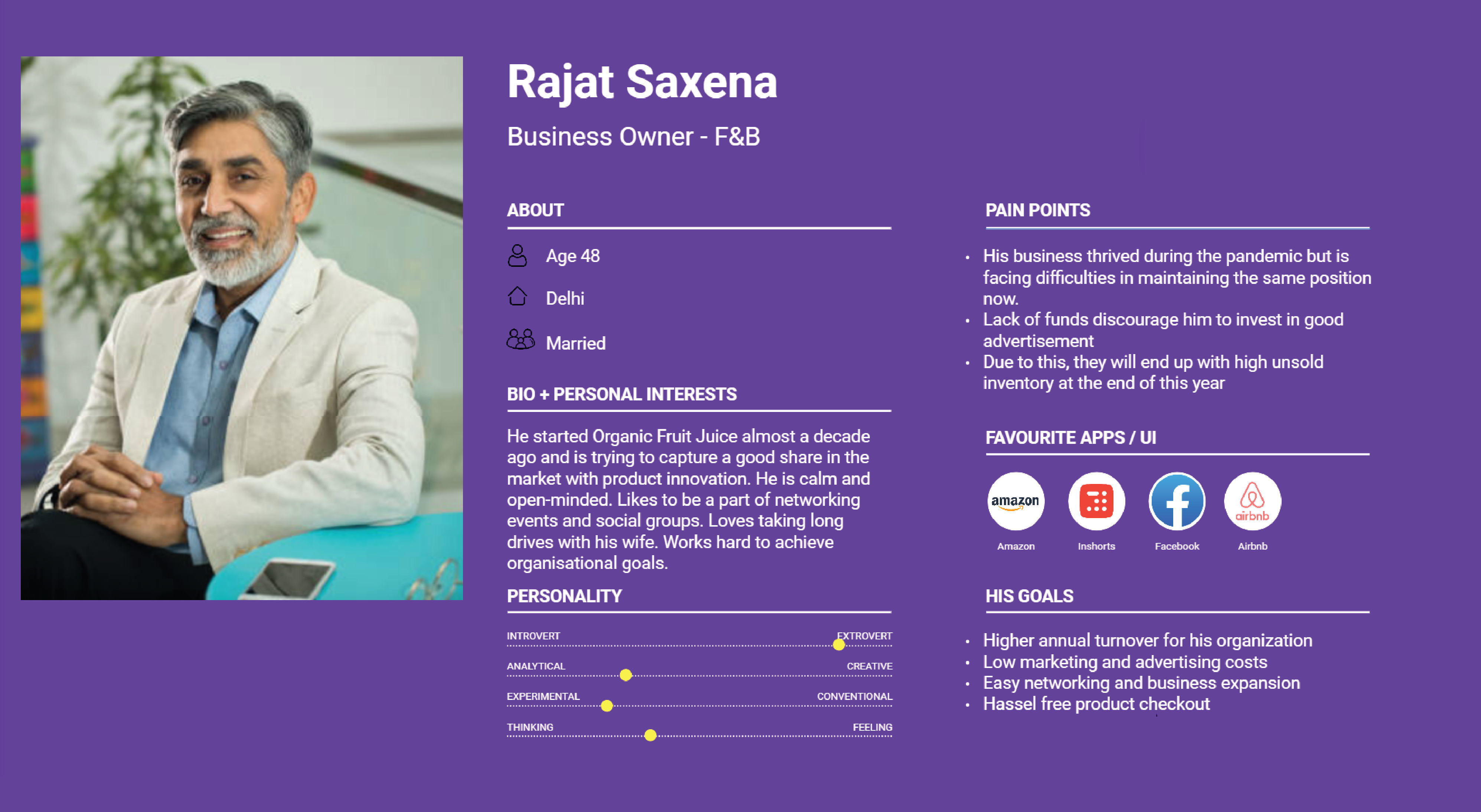 Caption: Based on our research, we came up with user personas that would comprise the customer base for BXI

Using what we had learnt, we began to come up with various iterations of what BXI could deliver and how it could effectively go to market and provide value to businesses with its mission. 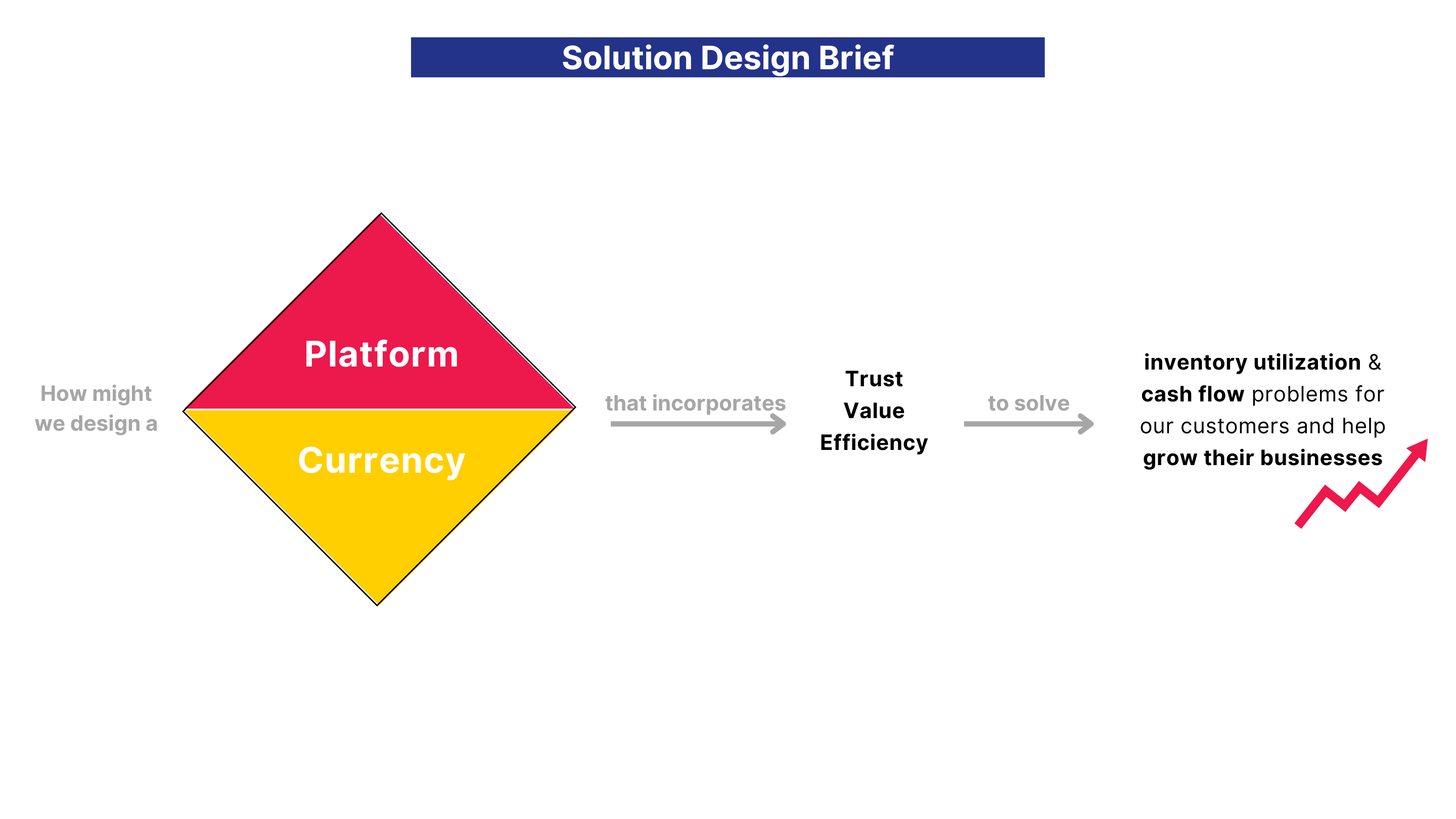 Caption: We needed to deliver a platform that served businesses efficiently and instilled trust in barter

One such iteration was Meso, named after the Greek word for ‘intermediate’. Under this concept, we envisioned BXI as something which could transcend traditional marketplaces and need based exchanges, and operate as an immediate enabler at the intersection of exchanges, marketplaces, yellow pages and digital currencies. Meso would operate as a data intelligence platform for B2B sales; a veritable ‘Google for B2B trading’ focused on enabling B2B procurements using data intelligence and a premium customer experience.

Caption: One of our early concepts, Meso, named after the Greek word for intermediate.

Another iteration, a follow up to the Meso concept, involved a hybrid plan that would combine the data intelligence component of Meso with BXI’s traditional barter business and transform it into a digital business. This model shaped up as something of ‘a supercharged B2B marketplace on steroids’, focusing on digital currency infusion, stock liquidation and marketplace curation to ensure a higher volume of transactions.

Ultimately, after various iterations, we were able to collaborate with BXI and deliver them with a go-to-market pathway that could help them realize their ambition of establishing a platform that enables seamless barter transactions in India. BXI and their foray into barter is just one example of innovation in the wake of COVID, and a heartening example of how design thinking can be applied to find opportunities that keep up with the cadence of the modern world. 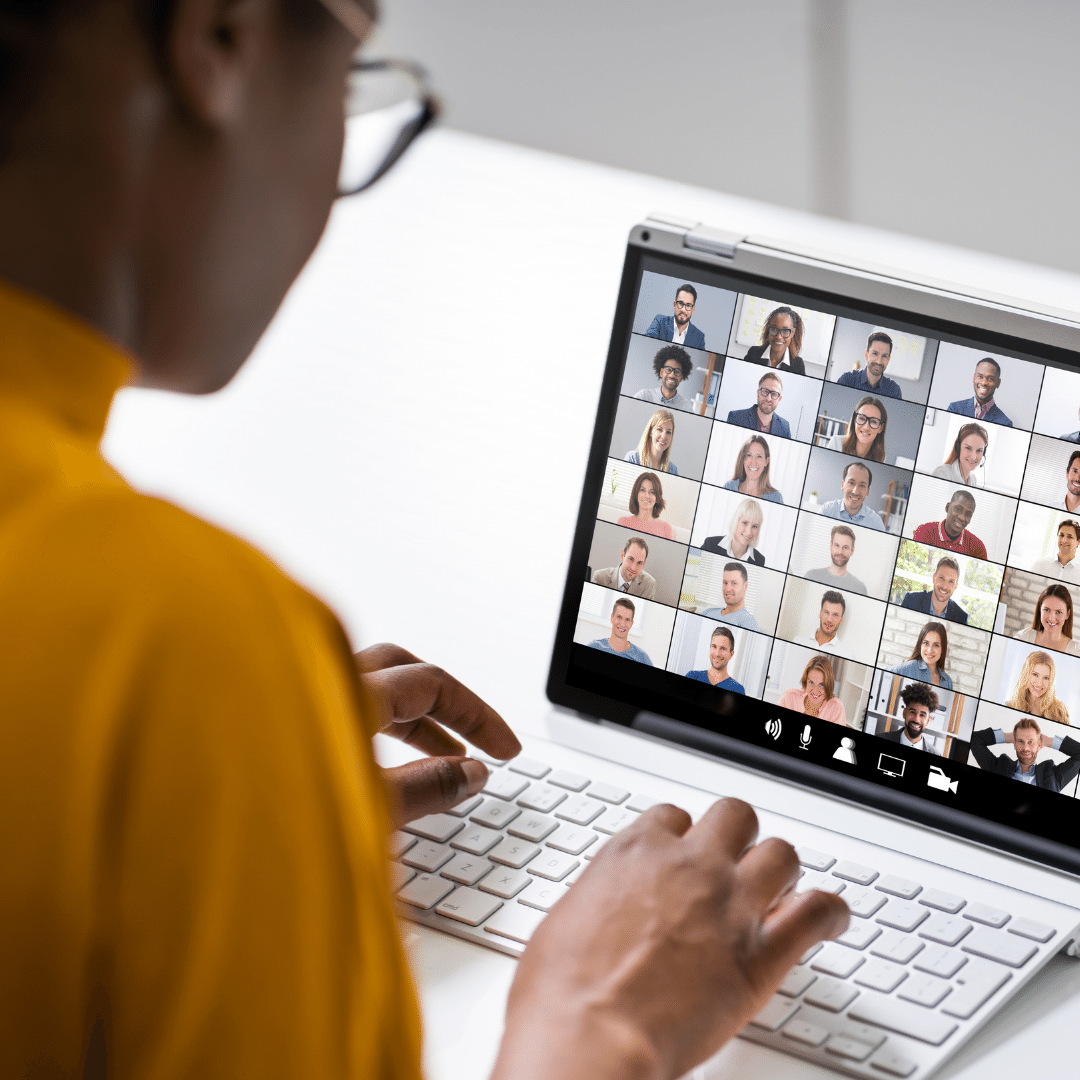 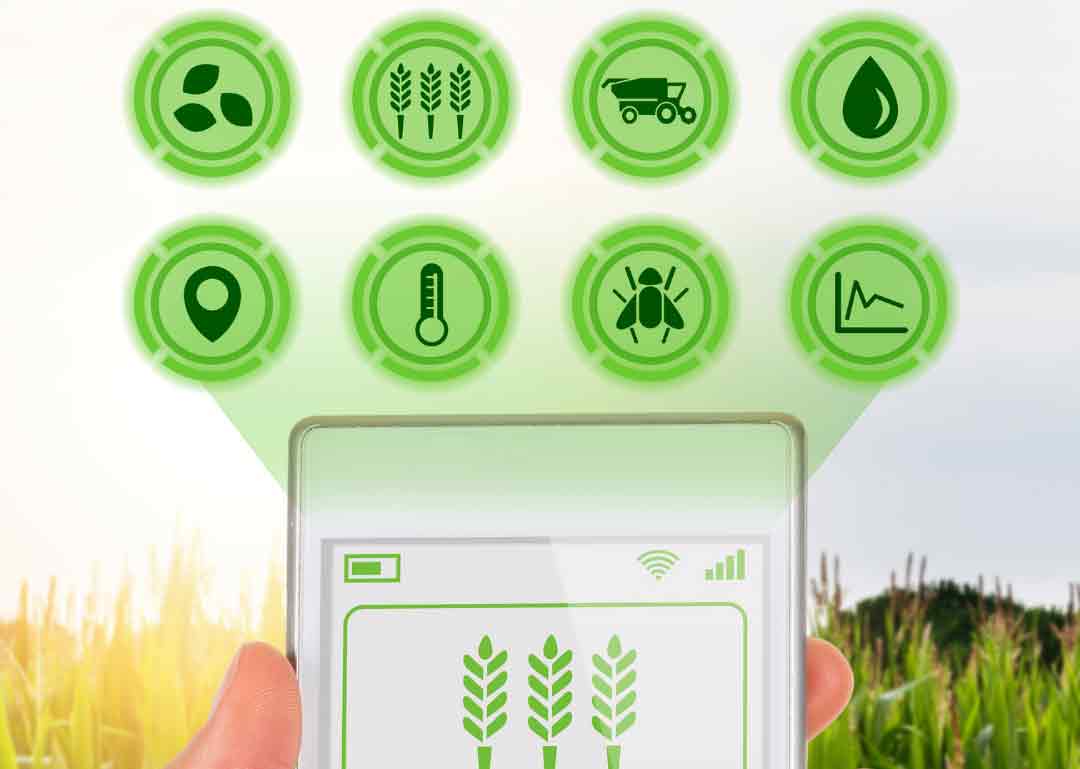 Solving inefficiency in supply chain through open data in agriculture